A Journey into the Holocaust

Switch To: Against All Odds: Surviving the Holocaust.com
Menu

Against All Odds: Surviving The Holocaust 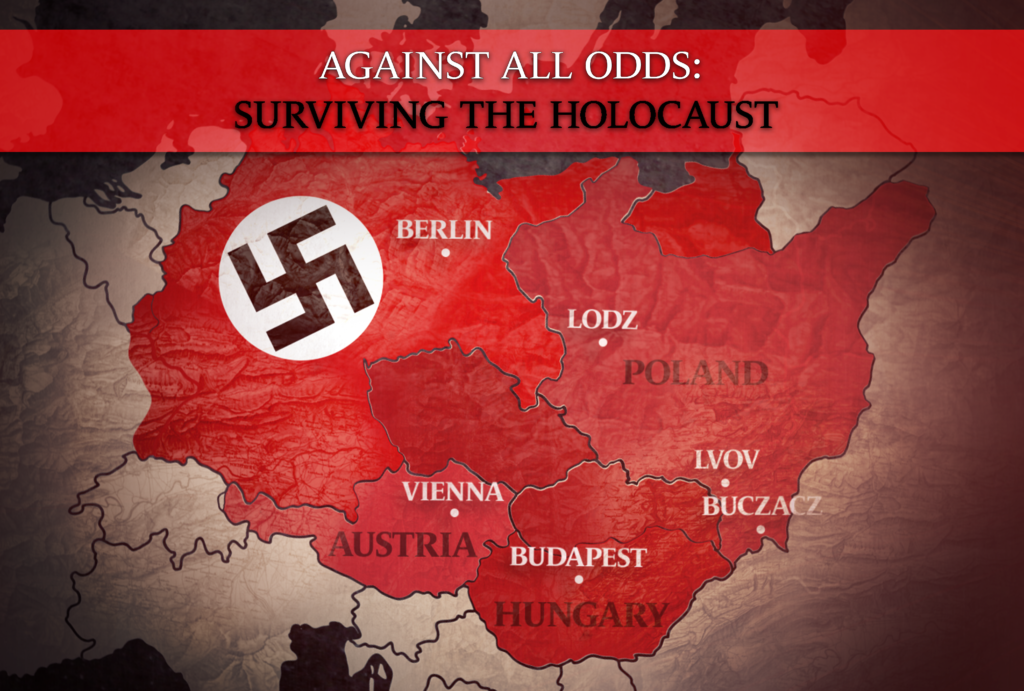 Against All Odds: Surviving the Holocaust consists of the stories of four Survivors that during the Holocaust lived outside of the concentration camps. They describe how lucky you had to be to survive. To survive you had to be lucky at least ten times, although often what turns out to have been lucky was often a terrible experience or death for another.

Let us know if you would like this in your favorite film festival, the name of the festival and who to contact.

Click Here to Watch “Against All Odds: Surviving the Holocaust”

We have just been selected as a Semi-Finalist at the Flickers' Rhode Island Intl Film Festival, our 8th selection for Against All Odds: Surviving the Holocaust You can stream the film from our website store.

Against All Odds: Surviving the Holocaust just selected by the Georgia Christian Film Festival which takes place in Augusta, GA in August. This is the 7th festival to select our film. The director said he watched the film three times and that "Everyone should see this film!"

Against All Odds: Surviving the Holocaust has been selected by the 2022 Christian Family Film Festival. They recognize that the lessons of this film will stay with viewers for the rest of their lives. The festival will run from August 8th - 17th.

Amazing news! Against All Odds: Surviving the Holocaust was just selected by Texas Faith &amp; Family Film Festival via !

Our new film, Against All Odds: Surviving the Holocaust, just won BEST #DOCUMENTARY at the Julien Dubuque International Film Festival

During the next 2 weeks my latest film, Against All Odds: Surviving the Holocaust is playing 4 times. 2 @ the Julien Dubuque Int'l Film Festival, (nominated for Best Documentary), 1 @ Aventura Turnberry Jewish Center, and 1 @ Point of Aventura Lifestyle Center. Website 4details.

Amazing news! Against All Odds: Surviving the Holocaust was just selected by Julien Dubuque International Film Festival April 20 - 24, 2022 via !

@chesatcarleton To fight antisemitism introduce teachers to , the film and teacher's guide used by teachers in 46 states. It raises the morality of students. All resources are free to teachers.

I just published How to end the Covid-19 Pandemic

How Deep Does anti-Semitism Run in a Person's Belief System? A 77-year old owner of a house covered in Nazi memorabilia in Belgium decided he would rather go to jail than take down the Nazi symbols.

I just posted a blog on how Anti-Semitism is Alive and Well at the New York Times Very important. As Yogi Berra said, dé·jà vu all over again.

North Carolina House Passes House Bill 437, Mandatory Education on the Holocaust and Genocide. The North Carolina Senate is the Next Step.

The A Journey Into the Holocaust free educational program, including a teacher's guide, is now being used by teachers in Canada and New Zealand. Register with your school email address at

We are now also on Filmhub. Teachers in 44 states use this film and its teacher's guide to educate middle and high school students about the Holocaust and genocide. https://t.co/8S0qIpB3zL

A video about how Lithuania citizens murdered 200,000 Jewish citizens, is embedded in this link: https://t.co/Qj8V5Nqb00

The film "A Journey Into the Holocaust" is now on Comcast On Demand! Tell your friends, parents, and children - then your teachers. Watch it https://t.co/6NrgAP8DMA

Insightful article on the Non-Muslim Rule against Christians Jews and tolerance in Muslim countries like Indonesia.

Paul Winkler - headed the State of NJ Commission on Holocaust Education and made it the educational leader has died.

Just signed Turnberry Injustice petition. A 22% annual increase without any discussion with members. via @ipetitions

University of London panel calls for destruction of Israel as a solution to ridding world of antisemitism.

Truman-Jacobson video watch it and show it to your entire family. This is something you will always remember.

Intersectionality is being very effectively and continuously used to spread anti-Israel and anti-Semitic beliefs.

Vatican says Christianity has Jewish roots and a Christian can never be an anti-Semite. https://t.co/ppOCHS0oUy

Dedication from Heirs to Grandparents who sent their children out of Germany in 1939 never to be seen again.

Part 1 of never b4 seen interview of Budapest Survivor Eva Szecsi discussing life as a Jew in Hungary in the 1930's.

Today is the anniversary of the start of Kristallnacht,the pogrom against the Jews in Germany and Austria. 2night AJITH played to 225 people

Yesterday 46 teachers registered to use our free educational program A Journey into the Holocaust in their classrooms. Register@ our home pg

Grand Mufti of Jerusalem played a major role in the Holocaust including successful efforts with Hitler and Britain.

Britian's Labour Party leader greets terrorists determined to exterminate Jews as friends, are we back to the 1930s?

My never seen b4 video of Budapest Survivor Eva Szecsi on why her family, knowing the danger, did not try to escape.

A Journey into the Holocaust is now on Amazon Prime. Prime members watch for free. Go to http://t.co/64kSLtfbsK

60 years after its 1955 pogrom against ethnic Greeks Turkey can no longer bury its ugly history against non-Muslims.

The steps being taken to get the Iranians to change their ideology are making the world subject to more genocides.

The Iran deal will unchain top ayatollah’s terror slush fund perhaps worth $95 billion from US Treasury. via @nypost

Anti-Semitic Remarks by US Secretary of State John Kerry and similar hints by Pres. Obama. History repeats itself.

Why has the world not responded to the genocide of Yezidi's in Iraq by ISIS? 74 Yezidi genocides since 630 CE!

Robert Wistrich, who wrote 29 books on anti-Semisitm including AntiSemitism: The Longest Hatred has died @ age of 70.

On your big TV now watch 'A Journey into the Holocaust' - Trailer & Movie at Vimeo On Demand http://t.co/XuVDGjUkeh

@AR_Pearce Please look at and our doc which is in 2k US schools.Why the Holocaust happened & why genocide continues.

Who is the devil Iran or the US? Iran calls America the "Great Satan" because western beliefs totally threaten theirs

Is it time for the Jews to Leave Europe? The history of anti-Semitism in Europe. By @JeffreyGoldberg in The Atlantic

Why this deal with Iran cannot be accepted if we want to preserve the world for our children. No one can trust Iran.

"I swore never to be silent whenever and wherever human beings endure suffering and humiliation." - #ElieWiesel

We now offer video on demand! You can stream our #documentary on the #holocaust & #genocide by visiting our webstore

Our Store just opened tonight. Buy DVDs & Blu-rays of A Journey into the Holocaust. Schedule screenings. Just go to

Daniel Jonah Goldhagen latest article on how beliefs can cause people to annihilate a targeted group.

Our film tells targeted groups to leave before it's to late. PACKING TIME for FRENCH JEWS, by Bret Stephens, WSJ 1-19-2015follows our point

Our screening at the Miami Jewish Film Festival is now SOLD OUT! For other screening info check out our website

Some insight into Radical Islam and its justification of grotesque Jihadist terrorism including be-headings.

ISIS is growing in Gaza and threatening the lives of writers and women. Eventually ISIS will forceably replace Hamas.

Assuming personal responsibility for your welfare and actions can stop the cycle of Palestinian Muslim violence.

Germany murdered up to 500,000 Romani during WWII, but now accepts full blame. How do they acknowledge their guilt?

The estimated annual price tag for the US war against ISIS is $40 billion.

Ken Burns documentary fails to show that Roosevelt could have easily saved 190,000 Jews during 1930s and 40s.

10 million Syrians have been displaced by the Assad regime's ethnic cleansing of Syrian Sunnis with Iran's backing. Iran is very dangerous.

ISIS has been given approval by their religious leaders to use weapons of mass destruction to commit genocide.

Media & UN agencies speciously alleged Gaza suffered 1,957 deaths in 5 wks, but most were terrorists, not civilians.

Chart of over 89 major genocides since end of the Holocaust in 1945 resulting in 55 million deaths now available at:

RT @Educate_Resist: Hate Crimes Against Jews On The Rise In Europe : NPR

New article The U.N. Handmaiden of Hamas via @WSJ explains how UNRWA has 12,500 employees in Gaza & subsidizes Hamas

Honor-shame cultures are ripe for genocide. Honor is achieved by murdering the competing culture, often by genocide.

Been working on more information for our web site We will shortly post a list of 90 genocides where 55 million died.

European anti-Semitism is the canary in the coal mine of Western Civilization. We are in very dangerous times.

@Enigma3304 @IOE_Holocaust Millions of Germans and their supporters in other countries carried out this genocide. See

@Enigma3304 @IOE_Holocaust Who is your targeted audience? Why are you only identifying a small group of people, your "demons", as murderers?

Siona poll finds that 74.2% of Sephardic French Jews are considering leaving France due to rising anti-Semitism.

You can see the 49 page executive summary of the ADL Global study on anti-Semitism at:

Rialto California School District asked 8th grade students to write essay on whether or not the Holocaust occurred.

Brunei last week began a new penal code based on Islamic law, or Shariah, that will make gay sex and adultery punishable by stoning to death

@JewishAgency reported 4/30 that "Suddenly, Israel is again seen as a real security alternative to what is taking place in Ukraine.’”

in a region that has cavalierly burned and destroyed churches & synagogues, ... the relevance of Israel to the concept of apartheid is zero.

German man talking about how his father saw himself as a German war hero and did nothing wrong to Jews and others.

Our third screening at the Palm Beach Film Festival has sold out 4th screening is being added at 2 PM today at Lake Worth's Stonzek Theatre.

The Journey into the Holocaust web site is up. It is loaded with info about the film and why genocide occurs.

Great movie review of our film A Journey into the Holocaust #AJTIH today. @HolocaustFilm

Limited # of tickets remain for April 4 at Palm Beach Gardens and April10 Lake worth screenings. For tickets go to:

The largest theater at the Cinemark Palace 20 Theater in Boca Raton is now sold out for the Tuesday 7:30 PM screening.

This film is the top selling ticket at the 2014 Palm Beach International Film Festival.

@Enigma3304 The world premiere is at the Palm Beach International Film Festival this week, April 4, 8 and 10th in Florida.

About to launch a web site on why Holocaust & genocide have/will happen. Send your blogs and documents. info@ajourneyintotheHolocaust.com.

Campus Brownshirts Rising on the campuses of US campuses. This is very serious rapidly growing bullying problem

Rose Koperwas, already naked in an Auschwitz gas chamber was taken out by a guard whose barrack she cleaned. Her rare story is in the film.

A detailed and deeply personal exploration into why the Holocaust, other genocides and mass atrocities happened and continue to happen around the world, again and again – even in modern times.